Home > About Us > Our Company

Hirschmann designs and manufactures custom wood windows and doors in the fine tradition of European craftsmanship. We use time-honored woodworking techniques combined with the latest developments in modern window and door manufacturing. The end results are precision windows and doors that add beauty to your home and last for generations. 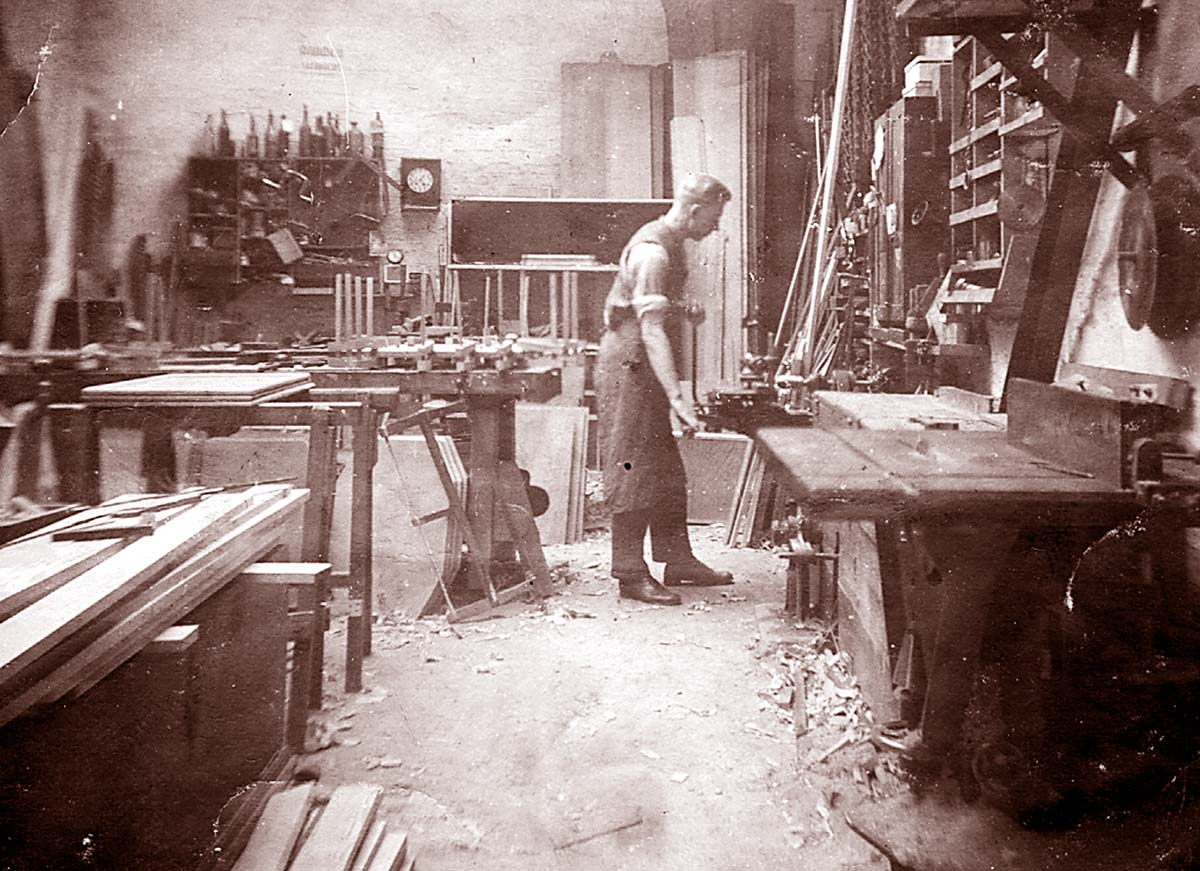 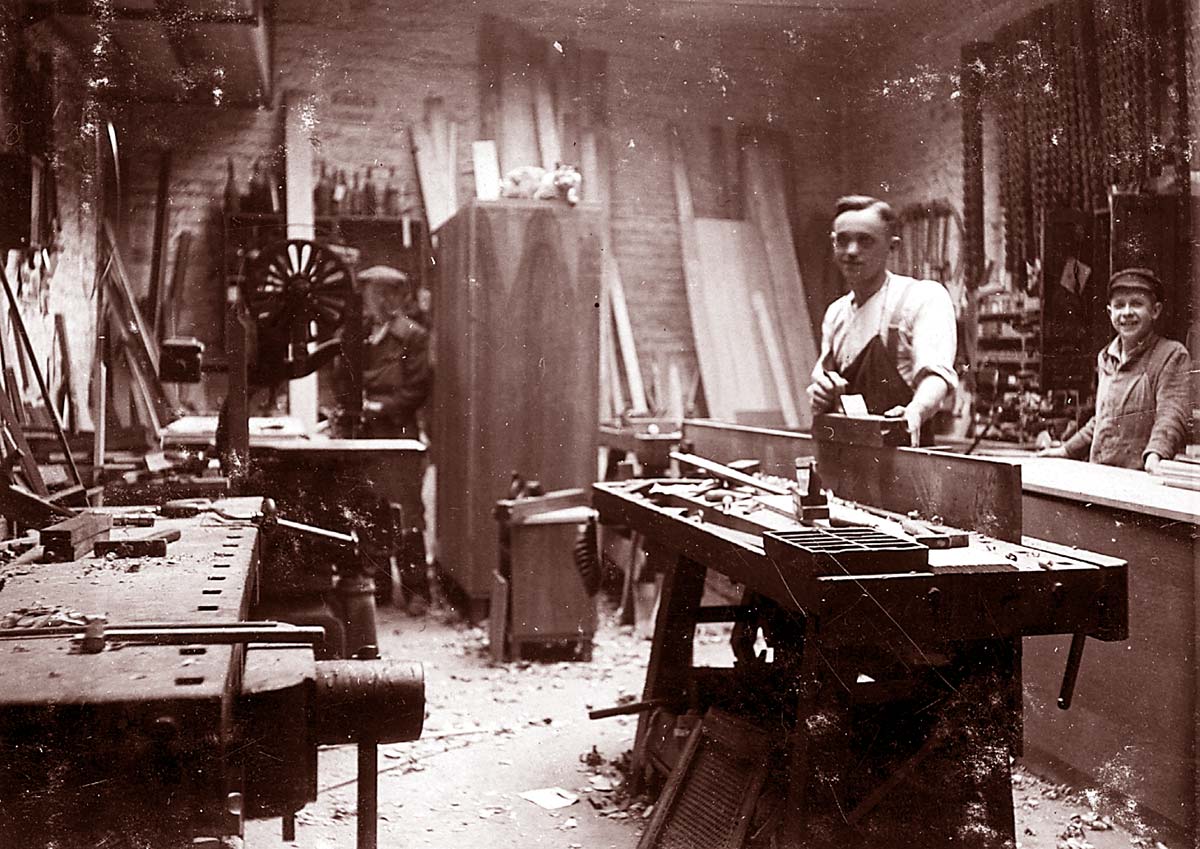 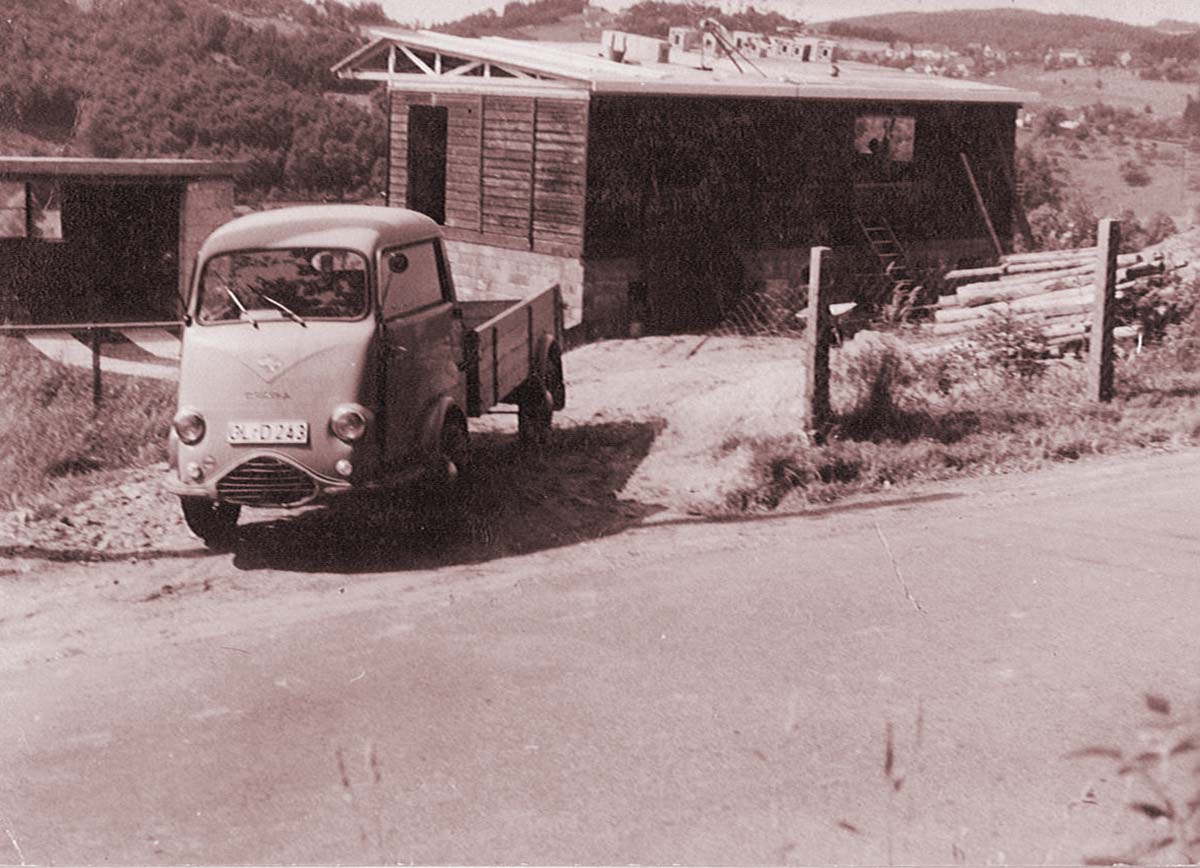 COMPANY HISTORY
The Hirschmann family history is also our company history. Practicing the craft of fine woodworking for four generations, our story isn’t unheard of, but it is unique in its longevity and in its blend of European master craft and American innovation.

For over 100 years, a legacy of craft has been handed down from father to son, extended with unparalleled skill and creativity, and enhanced by a constant desire to apply modern tools and techniques. From Josef to Franz and to Helmut, the Hirschmann family of Cologne, Germany established and built upon a reputation for peerless quality in residential and commercial architectural projects. In the 1980’s, our company was relocated to America, and the foothills of Vermont became our new home. Now led by Rolf Hirschmann, the fourth generation Hirschmann woodworker, we have expanded and occupy a state-of-the-art workshop facility in West Rutland, not far from some of the oldest marble quarries in the country.

In Vermont, we found more than we expected — a place that was an extension of our values as a company and as a family. There’s a kinship felt between the history of immigrant marble craftsmen, a culture of environmental sensitivity and a well-known Vermont respect for quality work. Amidst a landscape that instills a strong work ethic and the ability to adapt, the quality of life in Vermont continues to inspire us personally and professionally and to nurture our values — one of the most important assets we bring along on every project.

FOUR DECADES IN THE U.S.A.
In 1981, Helmut and Rolf Hirschmann — 3rd and 4th generation woodworkers from Cologne, Germany — set up a small woodworking shop on a hill in Pittsford, Vermont. Today, the company they built, H. Hirschmann LTD., incorporated in 1982, is nearing its fourth decade in business, continuing the legacy of fine craftsmanship passed down from father to son, from Europe to America, over more than 100 years.

The company’s commitment to time-honored woodworking techniques, combined with a desire to continually apply new technologies and modern practices, has led to many noteworthy achievements over the years — as it has built its reputation for excellence in quality, innovation and customer service throughout New England, the East Coast and beyond.

THE EARLY YEARS
It all started in the Pittsford shop, located behind the immigrant family’s home, with the company building everything from custom cabinets to stairs to entranceways for residential and commercial clients. Some projects featured marquetry work — the delicate art of forming decorative patterns and pictures out of wood veneers. Initially, Hirschmann worked on projects close to home, including windows and doors for an office building rehab as well as storefronts and interiors in downtown Rutland, VT. An early sales concept, supported with mass mailings and brochures, focused on the introduction of a specially designed tilt-and-turn window — an inswing, dual-function window that opened from the side or tilted to open at the top. 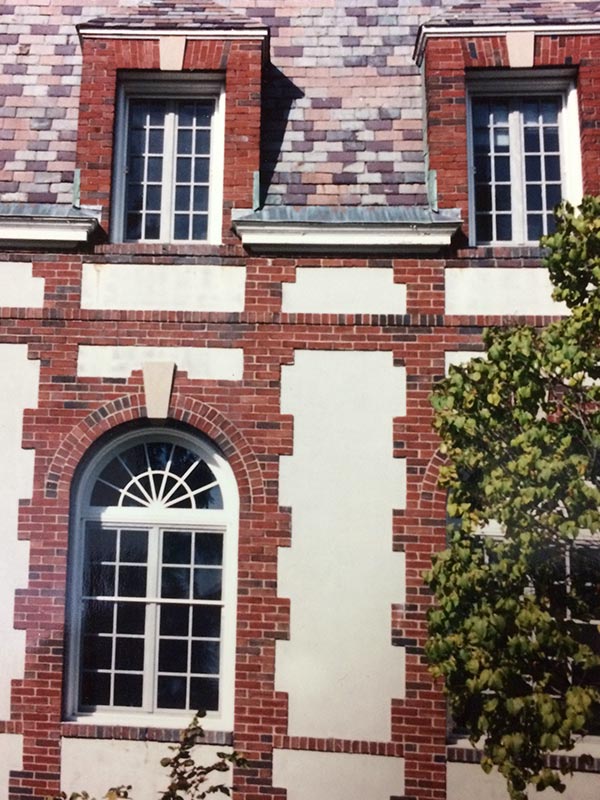 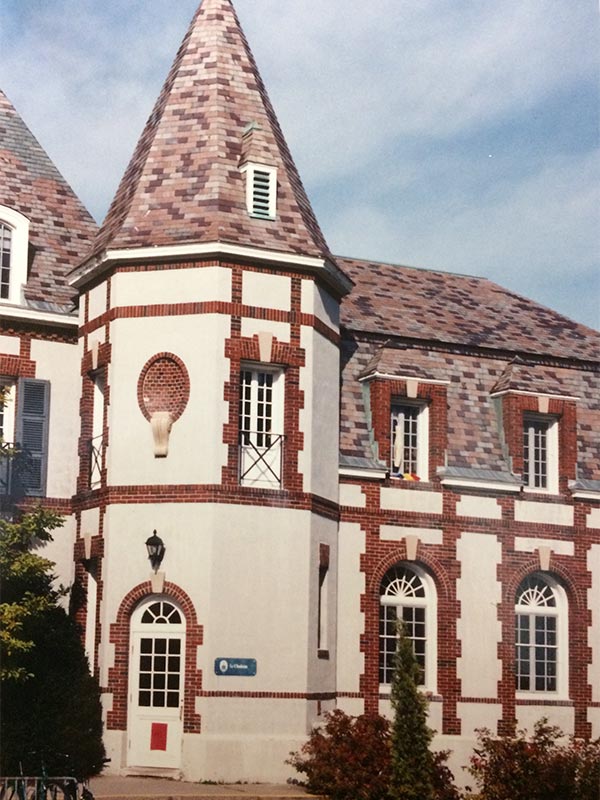 The company built windows and doors for several buildings on the Middlebury College campus, including Le Chateau — once the first and largest continuous “language house” in the U.S. and home to the college’s French Department — the McCullough Student Activity Center and the Mahaney Center for the Arts.

MOVING BEYOND VERMONT
After a few years, Hirschmann moved beyond the local Vermont market and began pursuing business in Boston, New York and New Jersey. In 1992, the company had the opportunity to work on the Conrad N. Hilton Library at the Culinary Institute of America in Hyde Park, NY, building, among other units, a large arched window wall for the stately facility’s entry.

Around this time, Hirschmann began to receive commissions for larger projects, including two private residences on Long Island. An additional project for Middlebury College involved crafting close to 1,000 windows for the college’s new Milliken-Hadley dormitory buildings.

Another noteworthy project at the time was the newly designed Yiddish Book Center in Amherst, MA — home to a non-profit organization that helps rescue and preserve Yiddish literature. Hirschmann built casement windows and sliding doors for the unique structure. The successful completion of that project then led to additional projects with the same architectural office, including a private residence on Martha’s Vineyard, as well as introductions to several island-based builders and architects.

Hirschmann gradually developed relationships with architects and contractors throughout New England, working on some of the finest luxury homes on the New England seacoast.

Hirschmann further developed a successful relationship with the Manhattan office of Pella Windows and Doors. This innovative collaboration continues to lead to more historic landmark reproduction work and new construction projects that fall outside of the typical Pella product line. 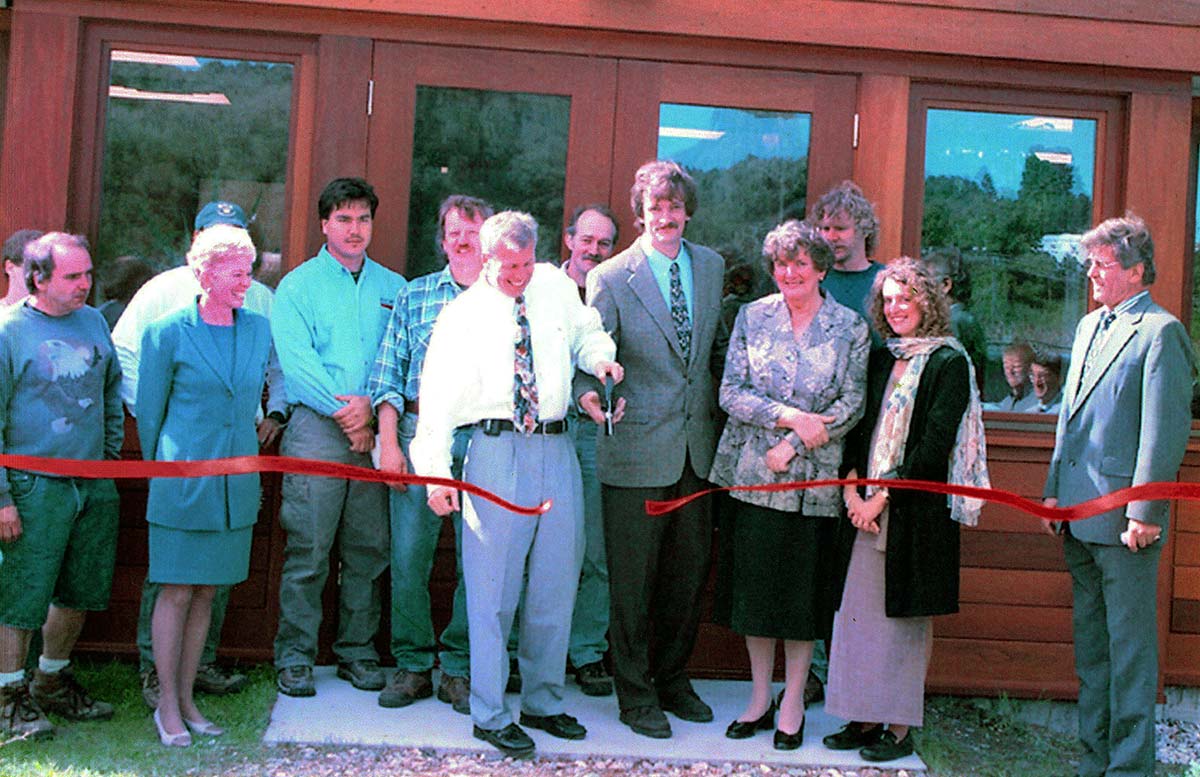 The late 1990s saw a significant change in how the company did business with the launch of its website in 1998. For the first time, Hirschmann custom wood windows and doors were exposed to a broad nationwide audience, resulting in many direct sales beyond the New England market.

As the millennium dawned, the company had nine employees and was rapidly outgrowing the Pittsford shop. In 2001, the business moved to a new 11,500-square-foot facility in West Rutland, built with support from local and state economic development agencies.

As the company adapted to the new facility and new ways of bringing in business, it continually adopted new techniques and technologies — from a modern spray booth to a CNC router and the use of CAD software for architectural drawings. Ownership of the company also went through a transition, as Helmut Hirschmann gradually became less involved and Rolf Hirschmann succeeded him as president of the family business.

Throughout these changes, business continued to grow, with projects ranging from the historic reconstruction of the Grand Queen Anne Corbin-Norton House in Oak Bluffs, MA; to a landmark estate outside of Cleveland, Ohio that was once owned by turn of the century railroad tycoons who also developed the Shaker Heights district; to an extensive rehabilitation of a private residence on Chicago’s Gold Coast; to a playful island residence in Hawaii.

In 2013 Hirschmann completed work on the historic Quincy House at Harvard College — the pilot project that began a multi-year renewal of the College’s 12 undergraduate Houses. Following Quincy House also known as “Stone Hall,” Hirschmann was commissioned for the Leverett House and McKinlock Hall renewals in 2015, Winthrop House renewal in 2017, and is currently involved in the Adams House renewal projects.

At another historic New England institution, Hirschmann crafted the windows and doors for Yale University President’s House at 43 Hillhouse Avenue. The 2014 renovation project was the first major alteration to the 19th-century Victorian mansion since 1937. 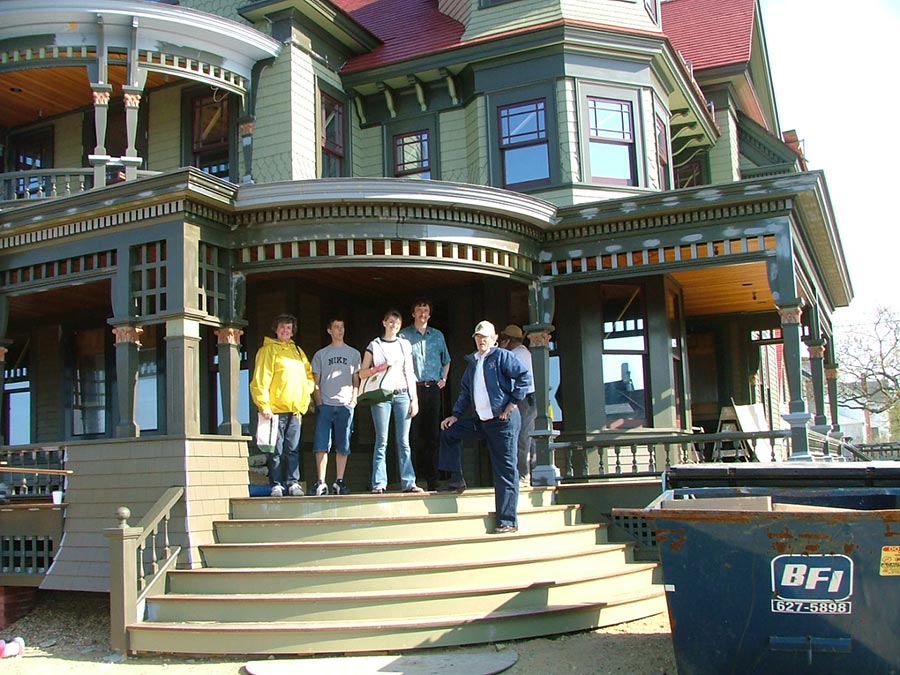 While Hirschmann nurtured those institutional relationships, they maintained and expanded their collaborations with some of the premier custom homebuilders on Martha’s Vineyard and beyond. Holmes Hole Builders LLC, Serpa Construction, Hurwitz Build & Design, Connover Restorations and others partnered with Hirschmann on fine custom ocean front homes on island, while Fifty-Three Restorations Inc., Wood & Clay Inc., Roundtree Construction, Sea-Dar Construction and many more provided unique opportunities throughout New England, NYC and the mid-West. As the Hirschmann brand approaches its 40-year milestone, the company’s impressive portfolio continues to expand, raising the bar on original craftsmanship and innovation with every completed project.

For more information, view our galleries of Windows, Doors and Signature Landmark Projects.

While Hirschmann embraced progress, it always maintained its unwavering focus on the finest quality workmanship and excellent customer service — with a team of highly skilled artisans carrying forth the traditions and values of the company’s forefathers.

As Rolf reflects on the past, he comments:

“The projects we have worked on and relationships we have formed these past 37 years have helped us become the company we are today. We look forward to continuing the family legacy of fine craftsmanship combined with a high degree of personal service that has enabled our business to grow and thrive here in Vermont and throughout the United States.”

H. Hirschmann LTD is located in the West Rutland Industrial Park. In close vicinity to The Carving Studio, a marble sculpture park, we feel at home surrounded by the rich history of one of Vermont’s most prolific marble quarries and the marble craftsmen who plied their trade here for well over a century.

Our manufacturing facility was built specifically for H. Hirschmann LTD and houses several state-of-the art manufacturing features and equipment including humidification control, two enclosed spray booths, two CNC machining centers and an in-house air & water infiltration test chamber. These features enhance our ability to produce our windows and doors with exacting precision, while providing a safe and pleasant environment for our craftsmen and women. 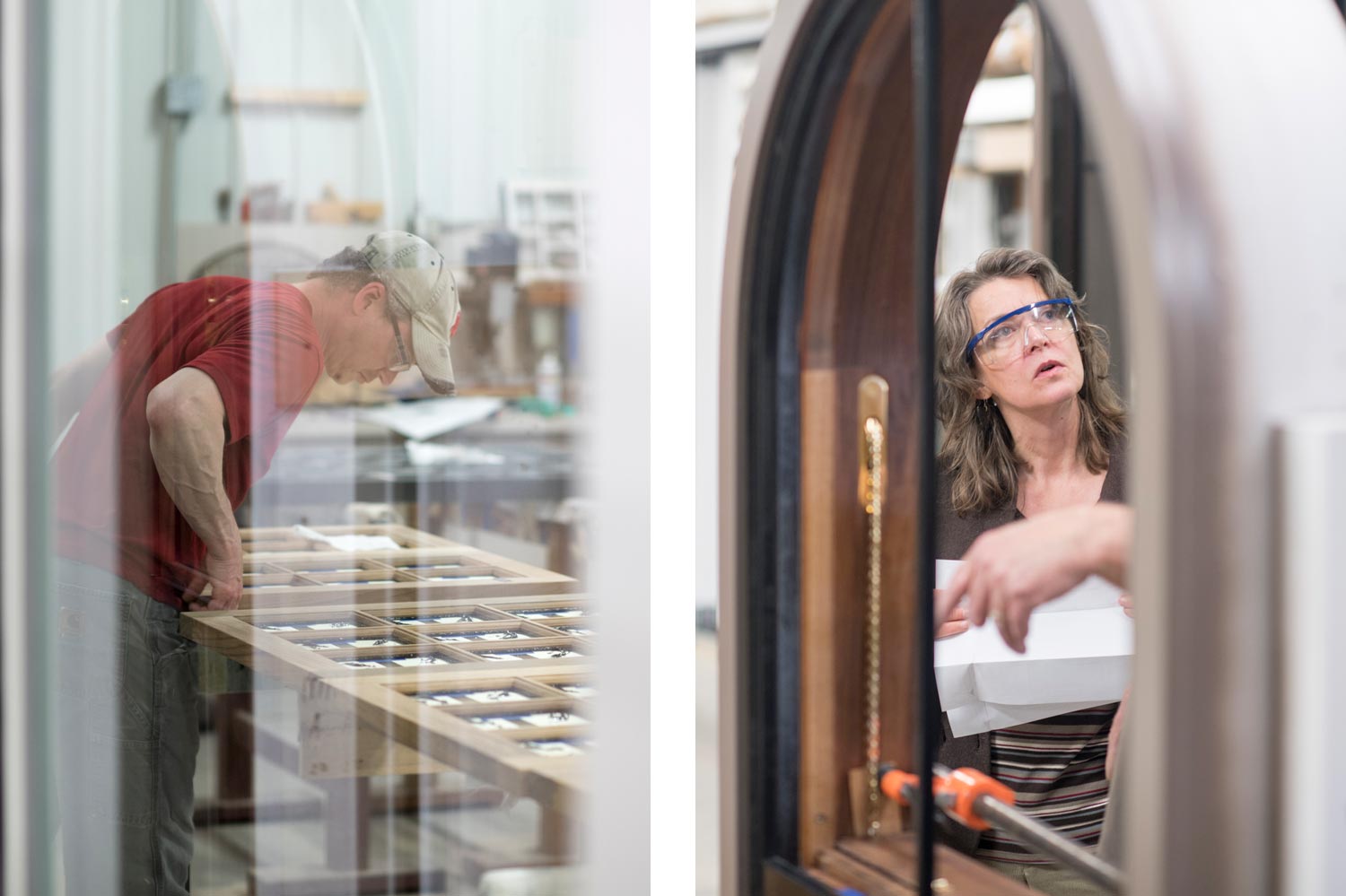 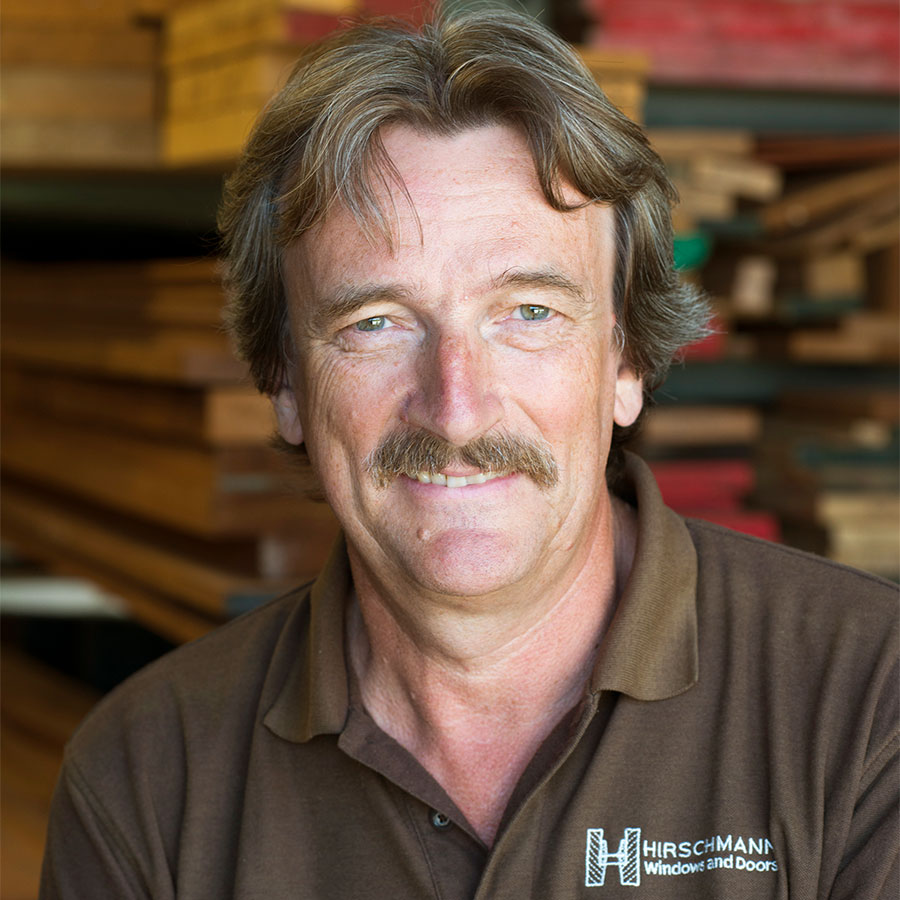 Years with Company All of them!
Personal Interests Family Time, Hiking, Golf, Movies, “Puttering Around,” Travel, Playing with Grandchildren

The fourth generation to carry on the Hirschmann legacy of fine woodworking, Rolf brings a positive “we can build this” attitude to every detail of every project, every day. Rolf considers the company hallmarks to be its team approach to every challenge, along with innovative thinking and master craftsmanship. He learned the importance of listening carefully and thoroughly, along with a daily dose of laughter, and applies these values to every aspect of life. 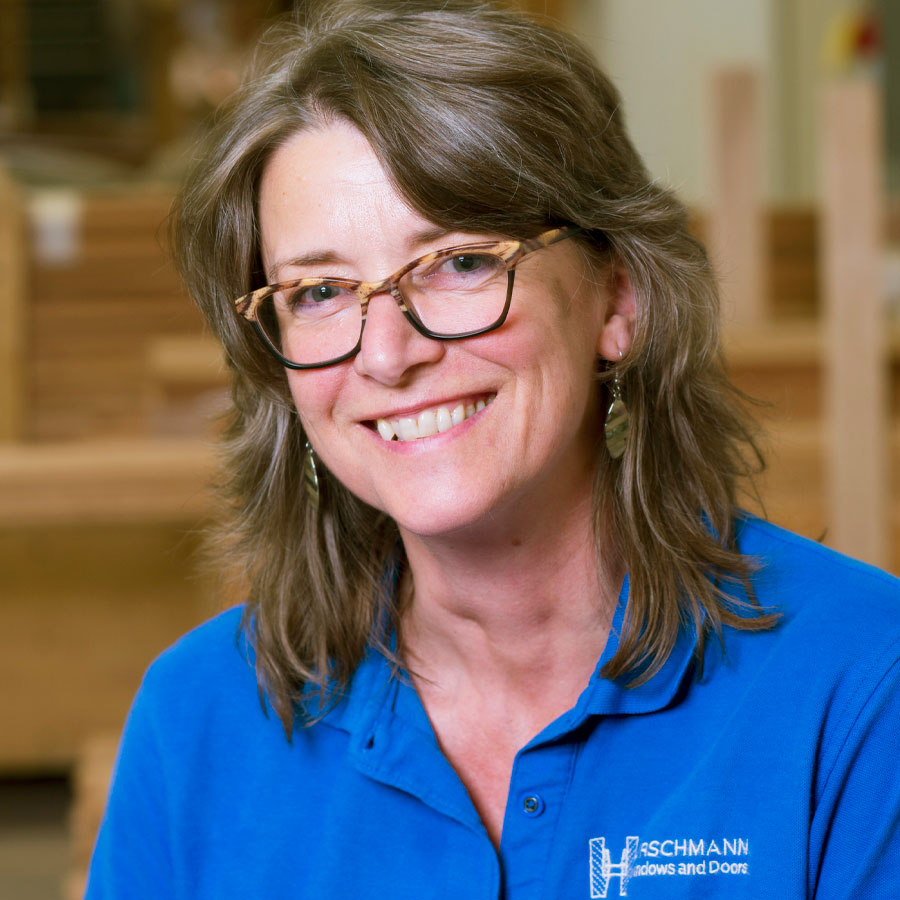 Years with Company 25
Personal Interests Gardening, Hiking, Getting Together with Family Both Here and Abroad, Mushroom Hunting and Foraging for Other Wild Edibles

As Office Manager Ursula believes the employees at Hirschmann are the company’s greatest asset, and makes them her main focus. Ursula provides every member of the staff with invaluable support, knowledge and dedication while handling everything from payroll to navigating benefits and required paperwork, and beyond. Her pride in the Hirschmann company extends beyond the impressive portfolio of projects, to the people behind the brand who make it a truly original place to work. 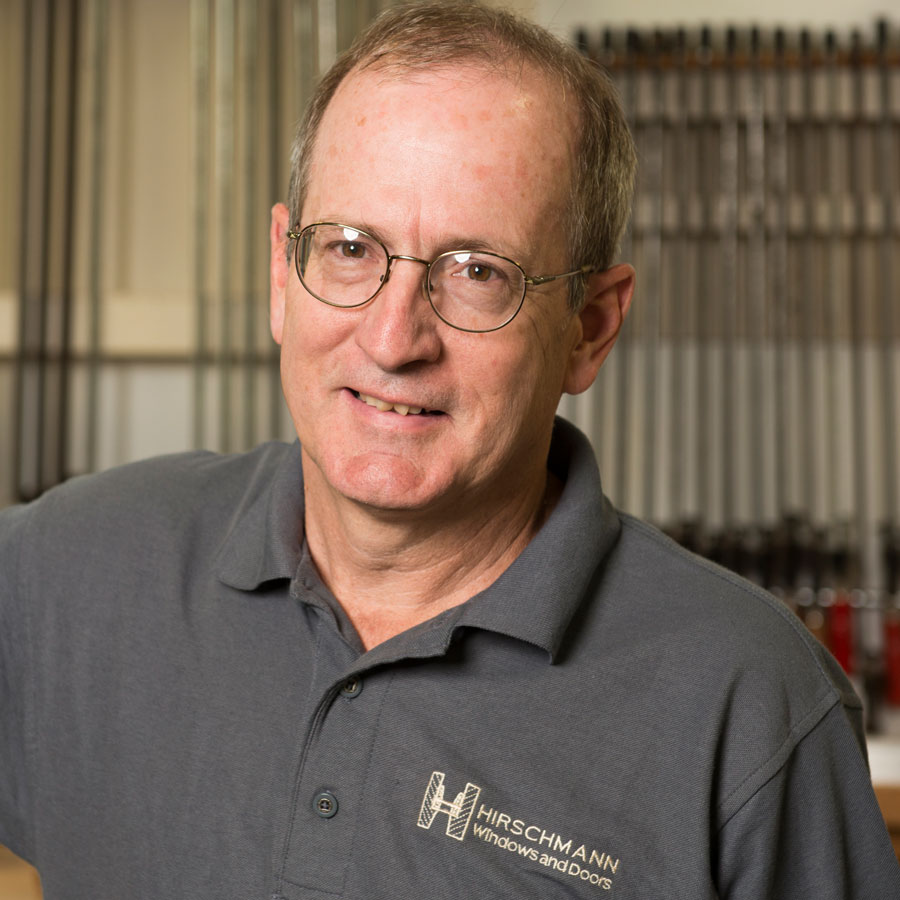 Rob began his love of woodworking when he was just 10 years old and has never stopped trying to find new and better ways of achieving excellence in his craft. He is driven by a strong desire to always find accomplishment and take pride in his work, and embodies the Hirschmann tradition of quality craftsmanship, practiced at the highest standards. 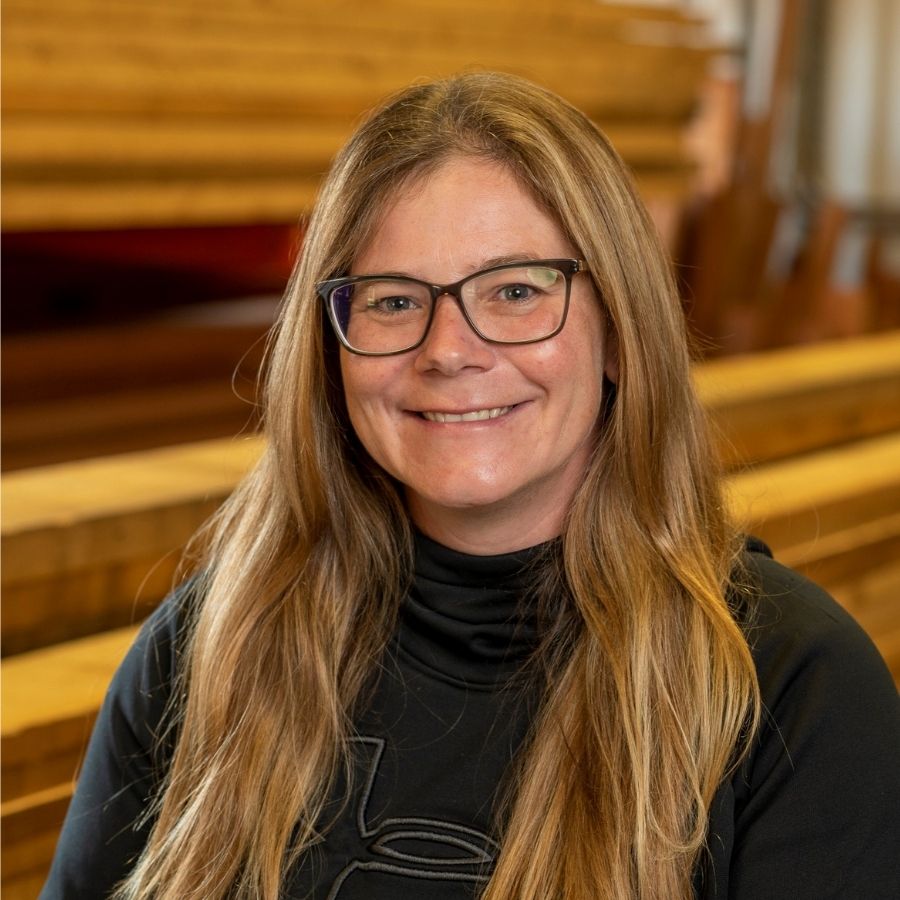 Krissy’s role is to assist with all aspects of production and support the manufacturing process. Krissy believes that enjoying her occupation makes it easy to be a positive, productive team player, and she takes great pride in the quality and craftsmanship that Hirschmann is known for. She loves the company’s original culture of innovation, collaboration, and putting employees’ safety first.

We are located in the heart of Vermont, 10 minutes from some of the best skiing in the East and the second largest city of the state, Rutland.

From Boston and points South: Take I-93N toward New Hampshire to I-89N toward Lebanon/White River Junction, VT. Take exit #1, US-4W toward Woodstock/Rutland. At the end of the exit ramp, turn left. Continue to follow US-4 W. approximately 41.4 miles. This will take you past the Killington ski area and into Downtown Rutland. Turn right onto West Street/US-4 BR E. Continue to follow US-4 BR E. Turn right onto South Pleasant Street. Turn left onto Sheldon Avenue.

H. Hirschmann LTD welcomes you to contact us about joining our team. We offer challenging opportunities for dependable and career-minded individuals. If you have experience in cabinet making, architectural millwork or fine woodworking, please send your resume to the address at the bottom of the page, or complete our contact form.